2013 promises to be just as tough, with a very difficult budget settlement and changes to Fire and Police services to be unveiled in the coming weeks. At least there won't be an election this year, assuming the coalition holds together...

And congratulations to colleagues recognised in the New Year Honours:

Hornchurch & Upminster MP Angela Watkinson has been knighted. I first met Angela on the night of my selection for Havering & Redbridge in 1999 and helped her to win the seat in 2001. She is a fine ambassador for politics and the Conservative Party.

Transport Commissioner Peter Hendy has also been knighted. Peter and I have crossed swords many times over the years, but even his greatest critics couldn't fault his organisation of London's transport for The Games.

Liberal Democrat Assembly Member Caroline Pidgeon is awarded an MBE. From 2008 to 2012 the three strong Liberal Democrat Group punched well above its weight although their reduction to just two members and the loss of Mike Tuffrey and Dee Doocey has left them struggling since May.

Today's Transport Committee heard from Peter Hendy and TfL Board member Christopher Garnett. The main subject was TfL's business plan which was unveiled yesterday, but there was a chance to catch up on other matters too.

Peter Hendy criticised a BBC story as 'mendacious rubbish'! The Inside Out programme claimed that TfL ignored reports of structural weaknesses in the Hammersmith Flyover and that they should have closed the road to traffic earlier. Peter told us that the story was based on a report which envisaged possible risks and responses, rather than identifying a specific danger. He had written to the local MP, outlining his concerns but was reluctant to pursue the BBC over their flawed story, as they already had other problems to deal with...

TfL's settlement from Government is good for two and a half years. The committee were concerned that such a short term might jeopardise TfL's plans. Peter stated that the plans are secure but continuing short timescales would make it difficult to agree terms with suppliers and would prevent major commitments. Long timescales also allow negotiation of procurement rates which are more competitive.

TfL are continuing to work well with DfT despite the recent reshuffle which saw the departure of London based ministers Justine Greening and Theresa Villiers. Peter noted that the train builders are located close to the new Secretary of State's Derbyshire constituency, so he was optimistic that the minister would be positive about capital investment in London's transport.

We discussed other ways that TfL might raise revenue. They have the largest advertising contract in Britain which brings in much needed cash. They are also looking at sponsorship opportunities as well as ways to develop land profitably. Crossrail stations will include space for retail outlets which will allow for some rental income. Boris had suggested exporting TfL expertise during his visit to India. With growing cities planning to introduce mass transit, Peter Hendy could see a lucrative market for these skills, but not at a price of denuding London of its own experts.

Christopher Garnett is retiring after six years on the board. He explained how Livingstone's 'rubber stamp' has evolved into a much more hands on board, with members taking more detailed interest in the decisions and workings of the organisation. We wished him well for the future.

Tony Arbour provoked heckling from the Labour members when he suggested introducing a participation limit on votes for industrial action. Peter Hendy said he shares our frustration at the large numbers of ballots for action, usually characterised by low participation, and leading to stories about strikes which then don't materialise. He praised the enthusiastic work of TfL employees but criticised their union leadership for failing to represent their members. However he noted that the Government are not keen on promoting industrial relations legislation so things are unlikely to change any time soon.
Posted by Roger Evans at 1:44 PM 1 comment:

This morning's Budget Committee saw the return of the insurers for a rematch over their response to the 2011 Summer Riots. The committee recently produced a set of recommendations intended to improve the response to such incidents, and the Association of British Insurers disagreed with some of them.

First we heard from Stephen Webb of the Home Office. They had identified shortcomings in the ancient Riot (Damages) Act, and are planning a medium term review of this legislation. In particular the failure to include motor vehicles - which didn't exist when the Act was passed - and consequential losses for business, would be reviewed. The application forms will also be improved and tested for Plain English.

Then the insurers arrived for what promised to be a scrap but turned out to be a damp squib.

The ABI welcomed a call for clearer guidance for claimants and plan to produce a document based on their successful flooding guidance. They will be working with local councils and some of the claimants, but it is unlikely that the Riot Damages Act will be overhauled in time for their publication, so the guidance will have to be reviewed and updated in future.

Disappointingly, there will be no advice on suitable insurance products. A shocking number of claimants from 2011 found themselves uninsured so some clarity about products is needed. Claire Kober, the rather impressive leader of Haringey Council, pointed to some businesses which were difficult to value. A local jeweller experienced fluctuating stock value as the price of precious metals changed. Gold prices had soared, leaving the stock significantly under insured when the riots took place.

In producing the new guidelines, the insurers would also consult the Cabinet Office.

The last word went to Deputy Mayor Kit Malthouse. He told us that disasters would continue to affect London but that it was difficult to predict their nature - be it floods, terrorist acts, or riots. A degree of flexibility and a willingness to work with the private sector and local communities will always be essential in such a large and diverse city.
Posted by Roger Evans at 12:47 PM 1 comment: 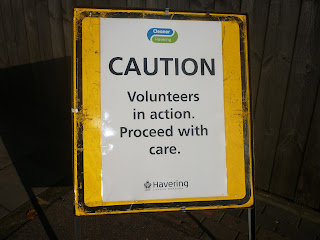 On Sunday I joined volunteers along with local councillors Barry Oddy and John Wood, for a litter picking session in Elm Park. The morning was supervised by Cllr Barry Tebbutt, cabinet member for highways, and the Leader of the council Michael White also came along to lend a hand.

We planted new flower beds outside the station and cleared up a huge pile of beer cans and bottles which people had thoughtlessly thrown over a fence onto waste land.

The day was a great success and built on the volunteering spirit fostered by the Olympics. This is a version of the Big Society that everyone can get behind. The exercise will be repeated in other town centres in Havering. 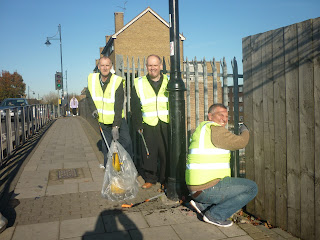 This morning's transport committee  heard evidence from TfL and the railway companies. The subject was the transport legacy resulting from the Olympics. Obviously a £7 billion capital spend has left valuable infrastructure but we were even more interested to hear if lessons had been learned and procedures improved.

The Javelin Service from St Pancras to Stratford was still running, without the distinctive name and incorporated into commuter routes serving Kent and the South East. Six trains per hour stop at Stratford International and the demand will be kept under review as Olympic venues reopen and residential sites are developed.

Eurostar is more of a disappointment, with the trains flying through the station without stopping. Furthermore there are no plans to introduce a Eurostar service. Darren Johnson felt that the name 'Stratford International' was fraudulent as no international services were available. Perhaps the station should change its name - 'Stratford Westfield' would create a sponsorship opportunity...

Maintenance had also improved, with Network Rail using a helicopter to identify faults along the main line. This has proved so successful that a second helicopter is on order and engineering work is being targeted to reduce disruption.

Opportunities to move goods trains outside the capital are also being sought. A surprising 28% of goods traffic passes through Stratford on route from the East Coast ports. More of this is being sent via Felixstowe and Nuneaton, leaving spare slots to run more commuter trains into Liverpool Street.
Posted by Roger Evans at 8:56 PM 1 comment:

On Sunday I joined Cllr Ted Griffin and a group of residents for their service at Hainault. The memorial here is only a couple of years old but it is respected and kept in good condition. The crowd of around thirty included veterans of the Second World War and teenagers - all generations were represented at a touching service which had all the meaning of the larger services elsewhere in the constituency. 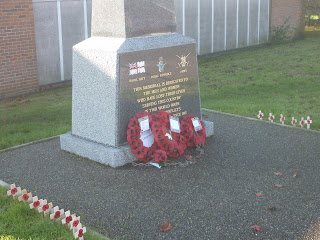 In the afternoon I returned to Romford for the service at the synagogue. The small building was packed with guests including the Leader of the Council and the MPs for Romford and Hornchurch & Upminster. With the hostilities in Afghanistan continuing, these services have struck a chord with many people who have friends or relatives serving there. My cousin's son, Joseph, has been there with the RAF. We remember those who will not return and pray for the safety of our forces around the world.
Posted by Roger Evans at 9:47 PM No comments: 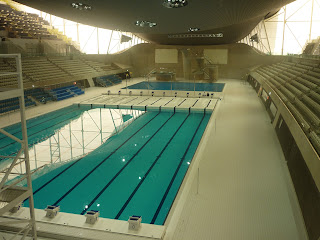 This morning the London Legacy Development Corporation appeared before the budget committee to lay out their plans for the Olympic site. This is currently closed to the public to enable removal of some venues and reconstruction of others. We were told that the reopening timetable is as follows:

December 2012 - the Greenway will reopen providing a walking corridor through the site, linking Hackney Wick and Stratford.

July 2013 - the North Park will reopen along with the 'Copper Box' venue which will host indoor sporting facilities.

Christmas 2013 - the iconic Velodrome will reopen.

April 2014 - the swimming pool will reopen minus the two wings of temporary seating installed for the games.

At that point only the Stadium will remain closed to the public.

Away from the venues, five large sites are to be developed for housing, creating an estimated 7,000 new homes. Expected receipts from sales will be around £1.1 billion, and the first plans for the Chobham Manor site are now under way. The athletes' village will provide another 2,800 homes when refitting is complete. The LLDC expect high demand to drive property values up, allowing them to provide high quality homes.
Posted by Roger Evans at 1:20 PM 12 comments:

Roger Evans
I am the Conservative member of the London Assembly elected for the Essex/East London seat of Havering & Redbridge, and former Leader of the Conservative group at City Hall. I speak regularly to local organisations about London government and my experience as a councillor. I also offer coaching and advice to prospective candidates. In October 2007 I published my novel, Gremal Quest - a treasure hunt around - and beneath - the streets of London.